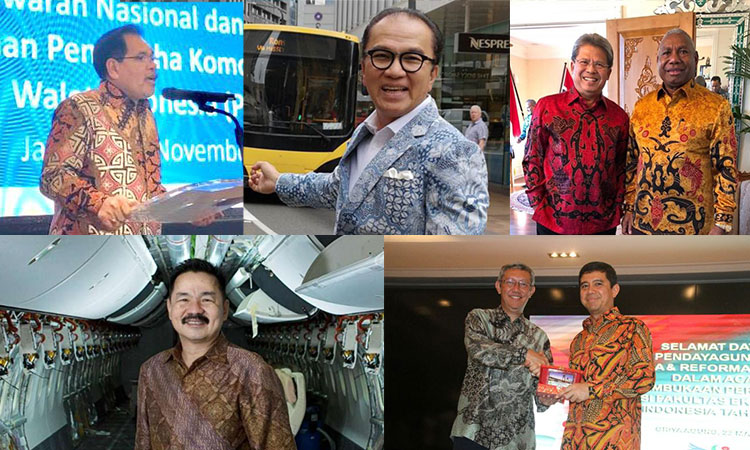 Batik is one of the cultural heritages that is owned by the Indonesian people. Batik today is also one of the products of the Indonesian nation which is popular and is loved by all kinds of layers of Indonesian society both from the middle to lower classes to the upper-middle class. Here are the figures who wear Indonesian Batik

Djauhari Oratmangun is the Ambassador in full to the Republic of Indonesia for the People’s Republic of China and Mongolia. He served starting in 2018 replacing the previous official, Sugeng Rahardjo. Djauhari is a senior diplomat with a brilliant career who has been poor across the world of Indonesian diplomacy.

Can be seen from various sources, Djauhari likes to wear batik, as seen in the picture, when he attended an event in 2019, he was seen wearing black and orange batik. He was seen wearing a Chinese penny coin motif combined with machetes and maple leaves. The Chinese penny coin is known to symbolize prosperity and well-being, and the prominent maple leaf motif with the Latin name Acer Pseudoplatanus is a symbol of harmony known to change colour from green, which turns yellow and turn orange. This leaf is also known as a symbol of loyalty, namely, the maple leaves only to fall in autumn.

Tantowi Yahya is the Extraordinary Ambassador of Plenipotentiary of the Republic of Indonesia for New Zealand Accredited to Samoa and the Kingdom of Tonga from 2017 to the present. He is also famous for undergoing his profession as a singer, actor, and host in Indonesia.

After graduating from the Indonesian Academy of Tourism (AKI) he was poor across the world of tourism by working as a professional in various hotels such as the Borobudur Hotel and the Hilton Jakarta Hotel.

It is also known that Tantowi worked at BASF International company from 1993 to 2000. After leaving BASF, he formed his own company in the Event Organizer field by gathering several artists who would become popular and have big names including, Titi DJ, Vina Panduwinata, Becky Tumewu, Lusi Rachmawati, Mollucas, Sherina, and many more. Under the banner of Ceepee, he has also held major events such as the 1992-1994 BASF Award, Putri Indonesia, Miss Indonesia 1994-1996, Citra Pariwara 1994-1995, and the Panasonic Awards.

As an artist, she has been a host of Who Wants To Be Millionaire Indonesia, has also been a country genre singer by releasing several albums. It is also known that the husband of Dewi Handayari and two sons became members of the DPR from the Golkar Faction from 2014-2017 before finally being appointed as Ambassador to New Zealand.

Seen in the picture, the brother of an Indonesian artist and entrepreneur, Helmi Yahya, likes to wear batik in the context of her diplomatic steps. Seen in 2019 he toured the city wearing a batik suit with sekarjagad motif with natural colouring from Bayat, Klaten. Sekarjagad symbolizes extensive knowledge for the wearer because sekarjagad is analogous to a world map consisting of several flap motifs arranged into one fabric field.

Rusdi Kirana is an Extraordinary Ambassador of Plenipotentiary for Malaysia from 2017 until now. Rusdi is one of Indonesia’s well-known entrepreneurs and is known as the founder of Lion Air Group, which has a number of subsidiaries such as Batik Air, Wings Air, Malindo Air, and Thai Lion Air. Lion Air Group is a pioneer of low-cost carriers (Low-Cost Carrier) in Indonesia.

In 2014, he was Deputy Chairperson of the National Awakening Party (PKB). Then in 2015, he was appointed as the Presidential Advisory Council before finally becoming the Indonesian Ambassador to Malaysia.

Rusdi was seen wearing a brown batik shirt made from silk in the cockpit of his plane, with a noble motif of sido combined with a klitik machete. Sublime Sido itself comes from the Yogyakarta Palace and Surakarta Palace. Sido Luhur can usually be worn on a wedding procession. Sido luhur means that each user will be blessed with nobleness, starting from the material, position, and whatever the profession, so that it can be blessed in every word and action so that later it reaches the peak of its worldly position.

While clitic machete is a small diagonal patterned machete which means it has subtle behaviour with gentleness, so it is expected that the user has compassion for each user.

Todung Mulya Lubis is an Extraordinary Ambassador of Plenipotentiary of Norway and Iceland from 2018 until now. Todung is widely known by the people of Indonesia as one of the successful lawyers and also law practitioners whose thinking is revolutionary and critical.

The man born in Tapanuli, 71 years ago, studied at the Faculty of Law, University of Indonesia. His legal career began in 1974, where he worked as a reader in a Legal Aid Institute (LBH) which was very focused on human rights. After that he continued his studies at the Law School of the University of California and Harvard Law School in the US.

Until finally in 1991, he founded his own law firm by the name of The Law Office of Mulya Lubis and Partners, where the firm was involved in a lot of corporate, commercial to the dispute resolution of corporate work. He was listed in the 500th edition of The Asia Pacific Legal in 2006/2007 as someone who was prominent and had a big influence in resolving disputes in Indonesia.

Todung also seemed fond of wearing batik as a diplomatic activity. Together with the Governor of West Papua, Dominggus Mandacan on his visit to Norway in 2018, Todung was seen welcoming with Papuan batik. Red with an accent of native Papuan bird motifs, birds of paradise, Papua tassel houses, known by the name of Honai and also Asmat carving motifs. The Bird of Paradise has a symbol of beauty, and the rich diversity of fauna in Papua. Whereas the Honai house motif symbolizes a home of happiness for its residents, and the Asmat carving motif, meaning the unique variety of carved sculpture traditions in Papua in particular, and in Indonesia in general.

Yuddy Chrisnandi is the Extraordinary Ambassador of Plenipotentiary of the Republic of Indonesia to Ukraine, the Republic of Georgia and Armenia from 2017 until now . Yuddy began his career as a member of the DPR from 2004-2009 for the Golkar Party, and 2009-2014 from the Hanura Party.

He also served as Minister of State Apparatus Empowerment and Bureaucracy Reform in the era of Jokowi Working Cabinet Volume I, from 2014 to 2016, before being removed and replaced by the next minister Asman Abnur. This man born in Bandung in 1968 started his education at the Faculty of Economics, Padjajaran University, Bandung, and his master’s and political doctor’s education from the University of Indonesia and completed when he was 36 years old. He also has a lot of careers in education by becoming an activist, lecturer, lecturer and speaker in national and international forums.

Also seen Yuddy’s diplomacy activities are inseparable from batik. He was seen wearing red black batik with a pisan bali motif in 2018. Pisan bali has a very profound meaning if examined further. This motif is usually given by female lovers to male lovers who want to travel far in the hope that the lover will come back again. This batik is full of prayer, hope and safety. Pisan bali comes from the word pisan which means again and bali means back. This motif consists of carving stone from Javanese temples in the ninth century.