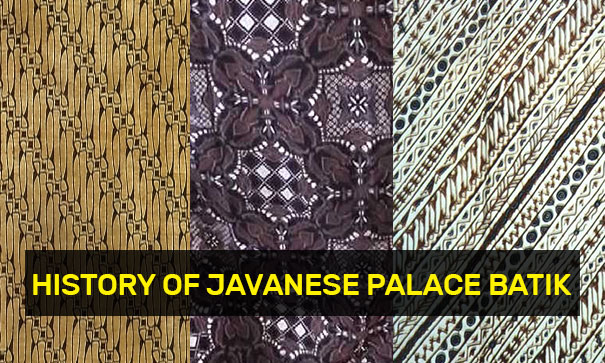 It is called the Javanese Palace, because the topic this time will refer to the early civilizations in Indonesia or the archipelago, especially in Java, namely the Old Mataram Palace, which consists of 4 regions, namely Yogyakarta and Pakualaman (DIYogyakarta) and Surakarta and Mangkubumi. (Solo). Before going there, at first in the era of the Islamic Mataram Kingdom, batik developed rapidly with a variety of motifs that were many and varied, not only the standard motifs that initially dominated the kingdom such as kawung, ceplok, and poleng motifs. Due to the fact that batik has become an official dress in the kingdom, batik is gradually believed to be a symbol of the legitimacy of a palace, where some of the motifs can only be worn by sultans or aristocratic kings in the palace.

Some examples include parang motifs, udan liris, hoek, cemukiran, and semen lar ageng. Due to its name which echoed throughout the archipelago, the Dutch Government through the VOC tried to try to reduce the popularity of the Mataram Palace with the politics of fighting against each other (Devide Et Impera).

Dutch efforts bore fruit in 1755, where the Giyanti Agreement occurred, which resulted in the splitting of the Mataram Kingdom into two parts, in the eastern part of the Opak River and domiciled in Surakarta led by Sunan Pakubuwana III, and the other was in the West of the Opak River, based in Yogyakarta, led by Sultan Hamengkubuwono I. Two years later, 1757 the Dutch re-entered the Salatiga Agreement between Kasunanan Surakarta and Pangeran Sambernyawa. So, as a result of the agreement, the Keraton Surakarta area was further divided into two, the northern part, the title Prince Sambernyawa has the title Mangkunegara I, but his nature is automatic, so he cannot have the title of sultan, but the title of Pangeran Adipati Arya. The same thing happened in the Jogjakarta Sultanate. In 1813, Governor Sir Thomas Raffles crowned Prince Notokusumo, son of Hamengkubuwono I (HB I) and Concubine Srenggowati, to become Kanjeng Gusti Pangeran Adipati Paku Alam I. The Duchy of Pakualaman covers Pakualaman and Adikarto Districts in the southern part of Kulon Progo Regency.

The Giyanti Agreement in 1755 also regulates the distribution of new gamelan, heirloom bedhaya dances, and several old puppets, and the creation of new styles of clothing. The book “Behind the Meanings of 99 Batik Designs” states that the development of art in the Keraton Surakarta is considered to be more rapid, elegant and beautiful, because the workers and thinkers in Surakarta are mostly women.

There are several Solo batik motifs that are not well known in Jogjakarta culture such as Pisan Bali, Bondhet, Larasati, Kokrosono, and Lintang Trenggono, which have also experienced cultural acculturation with many countries such as the Netherlands, China and India. There are other differences between Surakarta clothing, such as the development of the dodotan (kemben) cloth with more motifs, the use of the mekak, the curved lizard bun, and various other types of fabrics.

For the development of batik, the Yogyakarta Sultanate itself was slower than the Surakarta Sunanate at first. This is because the procedures used prioritize the style of the Ancient Mataram Kingdom. If the development of art in Surakarta is more beautiful and graceful, then Jogjakarta is more manly and decisive. As has been written in the previous article, there are many motives for the prohibition of the Jogjakarta Palace that can only be used by the king, such as the Rusak Parang, the Kesit machete, the row parang, and the rujak santhe. The development of batik in Yogyakarta was greatly influenced by the empresses and concubines of the king during his lifetime.

Finally, is the batik of the Pakualaman Kadipaten. Its uniqueness also occurs when the marriage occurs in the inner environment. As in Mangkunegaran, GBRA Retno Puwoso, Pakubuwono X’s son, went to Pakualaman, bringing the nuances of Surakarta into Pakualaman. Some of the arts that are rapidly developing in Pakualaman are fashion, dance and batik. The use of dodotan was also adopted, in dance using the lizard’s bun, bending bun, and pouch bun. The musician midwife Pakualaman knows gending in Surakarta, such as gambirsawit, kinanti jurudemung, and kinanti padang moon.