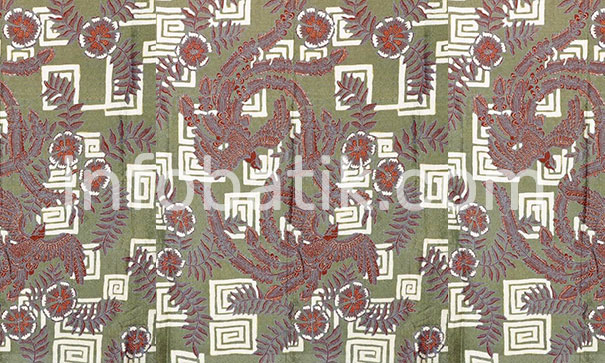 The Hong bird or popularly known as the Phoenix Bird is one of the batik motifs most often applied to a cloth. The Hong bird on a batik cloth does not identify a place or an area of ​​origin for a batik motif. However, from its history, the hong bird motif came from the north coast of Java Island, such as Cirebon and Pekalongan. This occurred due to trade shifts, where traders from mainland China anchored on the coast of Cirebon and Pekalongan, who insisted on knowledge of the legendary animal symbol from the country of the bamboo curtain.

The Hong bird or Phoenix (Feng Huang) is one of the four supernatural beasts (Si Ling) of Chinese beliefs, along with the dragon (long), kilin (qilin), and turtle (gui). When viewed from its etymological history, there are several versions of knowledge about the meaning of naming the Phoenix or Feng Huang bird. Feng Huang is defined as the king of the birds. Feng can be interpreted as a male Phoenix bird, while Huang is a female, which when combined is unity or mixture of male and female. In another version, Feng was defined as wind and in ancient times, Phoenix was defined as the God of Wind. Another version says Feng Huang is associated with the north. In Feng Shui, the Hong Bird is believed to bring a positive aura to its owner. This animal is believed to bring peace, fortune, fame and health or longevity.

The Hong bird has a long track record in dynastic history in China. This animal was first used as a decorative motif on wall ornaments during the reign of Emperor Huang Ti 2698 BC-2598 BC. Then appeared again during the reign of the Han dynasty (206 AD – 220 AD). along with dragons, Hong birds became the choice of decoration in every corner of the palace, where the myth began to build that the Hong bird was a symbol of the success of a leader in ruling his country. This motif is also used as an accent motif on porcelain, other than China. This animal is depicted with a bird that has a head like a pelican, has a neck like a snake, a tail like a fish’s scales, a crown of a peacock, a backbone like a dragon, and a skin as hard as a turtle.

From the above philosophy, it can be concluded that the Hong Bird has many meanings. Its head symbolizes virtue, its wings represent responsibility. His back denotes good deeds, his chest is humanity, and his stomach indicates trustworthiness. This is what makes the Hong bird motif manifestation applied to modern clothes or clothing such as batik cloth, shirts, or even bridal clothing. Especially in bridal clothing, the Hong bird is interpreted as a male and female pair destined to become one or married, as well as ornaments of peacocks and other birds.