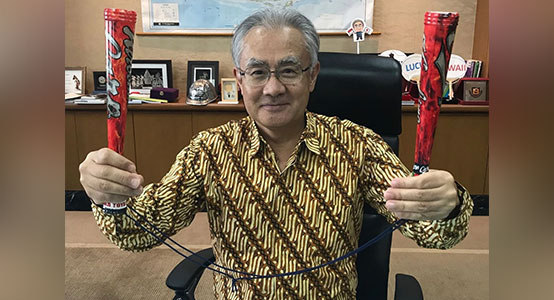 Masafumi Ishii, also known as Ishii San (Mr Ishii in Japanese) has been a Japanese Ambassador to Indonesia since April 2017. He is an accomplished Japanese diplomat born on November 3, 1967.

He often visited Indonesia since East Timor’s independence and considered the countries in the Southeast Asian region an important partner for Japan. He also began to get strategic positions when he was Secretary of the Japanese Foreign Minister 2002-2003, Head of the Political Division of the Japanese Embassy to America, and Deputy Director-General of the Foreign Policy Bureau in 2009.

The most recent one is with Yusuo Fukuda (Chair of the Japan-Indonesia Association) discussing the financing of several infrastructure projects such as the Phase 1 Jakarta MRT, the Jakarta-Surabaya fast train, Patimban Port Development, and the Padang-Pekanbaru toll road.

On Instagram, Ishii San is very famous for his funny style when being photographed. He was recorded to have followers on Instagram as many as 138,000 as of June 2020. This figure is classified as a lot for a diplomat. He is also known for diplomacy by taking up cultural themes, for example culinary, film and batik. Can be seen on his Instagram page, almost every day he wore batik clothes with a variety of motifs from all over the archipelago.

As seen in the picture, he wore a brown Sogan batik shirt with a machete pattern. This machete motif is a Klitik Parang. Parang Klitik has a small size and not too big. This motif is very suitable to be worn for people who have a small posture.

The main meaning of the machete Klitik is gentleness, describes subtle behaviour, and also wisdom. Parang Klitik is most widely applied to Batik from Solo, which has a black and brown pattern.