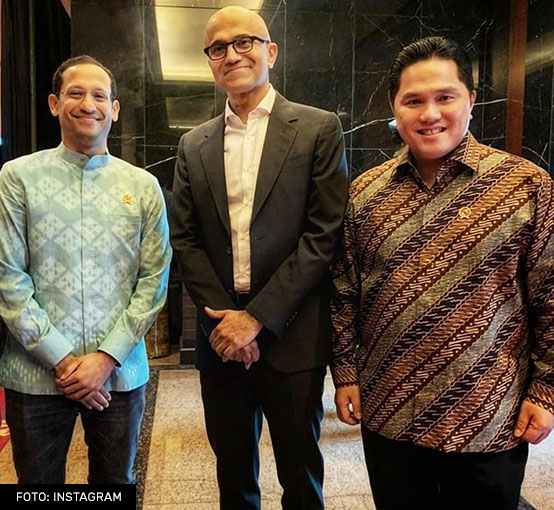 Erick Thohir is Minister of State Owned Corporation of Indonesia 2019-2024. He is one of the most successful businessman who is also going into politics by being Campaign Manager of Jokowi-Maaruf Amin. In corporate world, he is the Chairman of Mahaka Group, a conglomeration in media, entertainment, and sports. Mr. Thohir attracted worlds by acquiring Inter Milan, an Italian football club in 2013. After becoming a minister, he is often seen to wear batik shirts.

As it is seen in the picture (most right), Erick is wearing batik shirt with Parang Pattern. Spesifically, it is Parang Klithik he wore. Parang Klithik is one of the subsidiaries of original Parang pattern. It’s origin is from Surakarta or Solo which is constituted from diagonal forms and tidily lined in 45 degree, can be seen forming S letter. Parang pattern is known as one of the oldest batk pattern in Indonesia.

Parang is derived from parang weapon, a traditional weapon for war, a Keris look-alike. Parang word is originated from word of Pereng, means tebing (Hill). Parang pattern demonstrates wisdom, justice, and when it was worn by former kings of Mataram, Parang might have been interpreted as a symbol of a resilient mentality.

The details of Parang Klithik, worn by Erick Thohir, is usually worn by Crown Prince and Princess which exhibits a person with gentleness but he or she is deeply thoughtful.