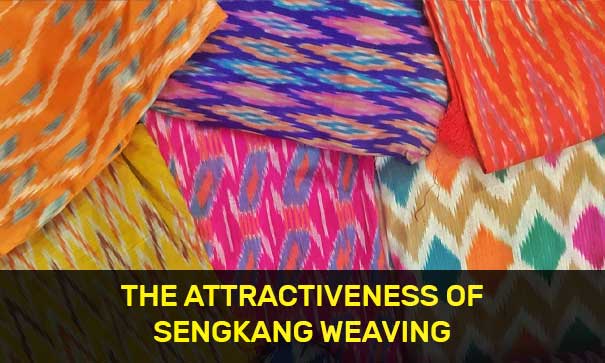 As has often been discussed, Indonesia is very rich in cultural diversity, especially in the aspect of clothing. Clothing, which is one of the important aspects in the historical development and civilization of the Indonesian nation since ancient times, holds a deep meaning for the perpetrators.

One of the most famous wastra fabrics from eastern Indonesia is the Sengkang woven cloth. Sengkang woven fabric is one of the traditions passed down from generation to generation of the indigenous people of Sengkang, South Sulawesi. More precisely, it is in Pakanna Village, Tanasitolo District, where almost the entire population is a weaver. After that, Sengkang weaving developed in other villages such as Empagae Village and Assorajang Village.

Historical sources say that the Sengkang woven cloth not only had the main function of covering the body in ancient times, but also other aspects. Some important aspects such as social, religious, aesthetic, and economic are also in the roots of the culture itself.

The social function is shown in the same way as the Sengkang woven cloth, which can be used several times to show a person’s economic degree. The more elaborate and the better the silk, the more wealthy a person or a family is.

In the religious aspect, Sengkang weaving can also be used in several local religious custom events. The aesthetic aspect, where over time, there are so many people who compete and buy Sengkang weaving so that we often find Sengkang woven fabrics with various patterns and colors that are not only used in formal events, but also informal events such as clothing. relax.

The economic function is also indicated by the added value resulting from the trading of the Sengkang woven fabric, which makes the weavers more prosperous.

In the past, weaving Sengkang was a personal garment used for several important celebrations, which many people still wear, especially for the celebration of Lebaran.

Sengkang implicitly also has an educational aspect in it, where the tradition of the indigenous people of South Sulawesi or known as the Bugis community, educates their daughters to weave. Where the stigma attached is that adult girls are required to master how to weave.

Along with the rapid pace of tourism in South Sulawesi, the presence of Sengkang woven fabrics is very attractive not only to local tourists but also foreign tourists. Weaving Sengkang also has many motifs that are made with vertical and floral patterns.

One of the taboos held by weavers to date is that they have to create even or odd patterns. Some examples of patterns such as Cobo, Makkali, Balo Tettong, Balo Renni, Toraja Carving, and also Bugis Script.

There are also rules that are used according to their social status, where single and married children have rules to wear certain colors or patterns to mark their status.