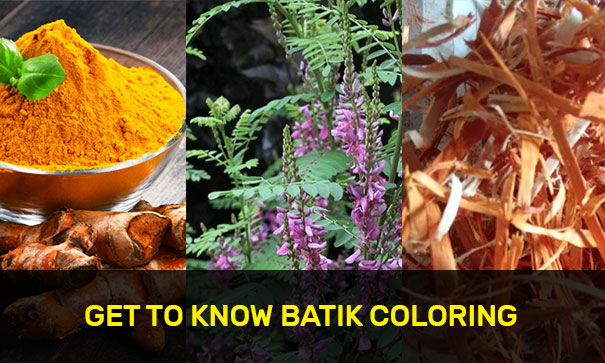 A piece of batik cloth consists of several kinds of elements in it, such as pattern, thickness of the cloth, fabric smoothness, and color. Color is the most important element because it influences perception and is sometimes the main indicator of the origin of a cloth and batik pattern.

For example, the solo batik cloth has more brown and black colors. Let’s get to know the colors used in the batik industry, which are categorically divided into two, natural colors and artificial or synthetic colors.

Natural dyes are coloring on batik which is obtained from various kinds of plants or living things on earth.

Here are some materials that are used as natural dyes for batik fabrics:

The first dye is turmeric. Turmeric is known as a kitchen spice for cooking food or also for medicine which has many properties.

Not only that, turmeric can also be used as a dye for batik, which produces a lot of yellow in batik. Usually what is taken is the rhizome and root tubers.

The second plant is the indigofera plant which is included in the shrub type.

Indigofera or what is often called indigo produces a blue colour on the fabric.

When growing into a plant, this indigo forms a bush and develops from the seeds.

3. The skin of the Jalawe fruit

The next dye is the skin of the jalawe fruit (Terminalia Bellrica) which is a very popular natural dye for batik.

The colour produced by jalawe is greenish-brown which is very often found in batik from the Central Java region, especially in the Klaten and Jogja areas. Apart from being a batik dye, jalawe is also used as a traditional herbal medicine

The fourth natural dye is tea (Camelia Sinensis) which is one type of plant that is usually used as a beverage ingredient.

The fifth plant is secang (Caesaslpinia Sapapan Lin) which is a typical Indonesian spice plant. the colour produced by secang wood is the red colour the stem is extracted from. Red can come out after extracting the secang wood from the yellow colour.

The sixth plant that can be used as a natural batik material is shallots (Allium Ascalonicium L) which are used for cooking, where the skin is usually taken which can produce an orange-brown colour.

The seventh plant is the coconut fruit (Cocos Nucifera) which is often found in tropical countries such as Indonesia. usually, the coconut fibres are used to extract the colour which produces a brownish cream colour.

The last plant that can also be used as a natural batik dye, namely the mangosteen rind. Mangosteen is not only a delicious fruit to eat, but also as traditional medicine. The way to extract the colour is by pounding the skin of the fruit until it is smooth and soaking it with ethanol. The resulting colours are red, purple to bluish.

For artificial dyes, it is a chemical compound that is made to produce a colour. Like food colouring or wall paint, batik cloth colours can also be created with a special formula.

The second dye that is commonly used is indigosol dye. Usually, indigosol is used because it has a strong ductility resistance, flat colour properties and is classified as bright. Another plus is that it is cheap and easy to get.

The last substance is remasol. Remasol is a synthetic colouring agent used for the melting technique in batik. The nature of this substance is water-soluble. Its main property is resistance to tearing, has a low-affinity power