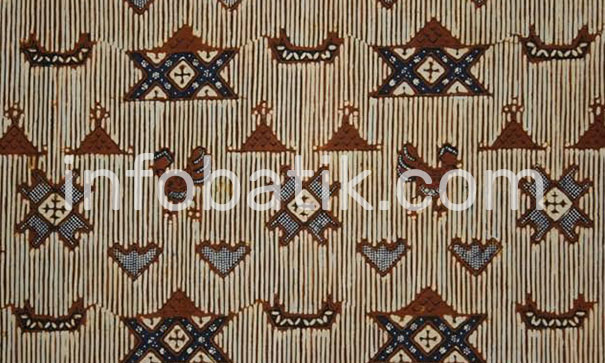 One of the most diverse Indonesian batik is from Java Island, especially many of which come from the interior such as Solo, Yogyakarta, Klaten, and Banyumas. This time we will discuss one of the famous motifs from Banyumas, namely the Puger Chicken batik motif. In the scientific literature, nothing can explain how batik entered Banyumas. However, according to information from many sources in the Banyumas area, batik entered the area due to the presence of a duchy (district). To fulfill the need for clothing, the followers of Pangeran Diponegoro and the demang (regents) made batik, and the motifs that were made also had many similarities with the regional motifs of Solo and Jogja. At that time, the Regent of Banyumas, Pangeran Aria Gandasubrata (1913-1933), was a member of the Mataram kingdom who made great contributions in developing the batik industry in Banyumas.

Banyumas batik has a special character that makes it iconic. The colors used are more similar to those of Solo and Jogja batik in general, namely soga or brown mixed with dark red, or a combination of ivory. The background is also decorated with many other batik ornaments such as kawung and geringsing. As explained earlier, the Ayam Puger batik motif is one of them. Ayam Puger illustrates the social situation of the community at that time, which is depicted as a chicken with a traditional Tikelan house and surrounded by roosters and goats, which were the pets of the Banyumas people at that time. There are also other sources who say that the Puger Chicken motif is a symbol of the arrival of Pangeran Puger (Puger is the current Jember district) who came to Banyumas during the Mataram war era, where he really liked the chicken motif.