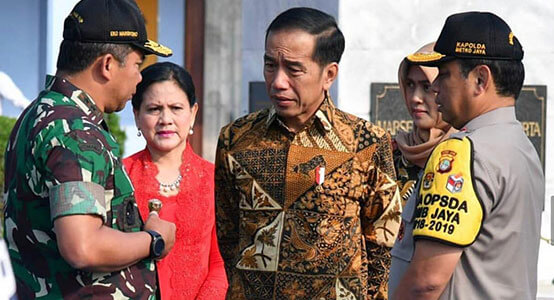 He is The Seventh President of Republic of Indonesia, Ir. H. Joko Widodo, a man born in Surakarta 21st June 1961, widely known as “The People’s President”. He is also known as a person who love batik, which frequently worn in any occasions such as formal and state occasions. Moreover, on the very first state portrait along with the cabinets, he and the cabinets were seen to be wearing batik instead of sartorial suit attire in the Istana Negara.

In the picture, The Mr. President whose nickname Jokowi, was seen wearing batik shirt accompanied with The First Lady, Iriana Jokowi along with officials. The pattern worn is known coming from Javanese Traditional pattern, particularly from his origin city, Surakarta. Jokowi is also often seen wearing such of that color, blackish, brownish, goldy , whitey, and so on. The pattern is so-called Pamiluto.

Pamiluto is constituted from symmetric and geometric forming harmonious triangles. Pamiluto is believed from the tale of a tabib (traditional doctor) who wore patched shirt, who traditional Javanese people considered that when they are in ill, they might be healed because of the tabib. The Pamiluto itself is devired from the word of pilut or milut in Javanese whose meanings are the same, to attract. In other words, the person who wears Pamiluto will be the center of attention and the viewer is going to be attracted. In addition, Pamiluto is regularly worn in engagement or wedding reception.