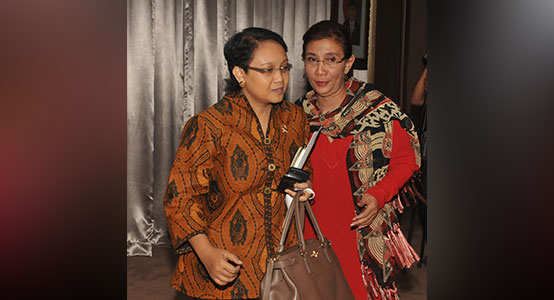 Retno Lestari Priansari Marsudi is the Minister of Foreign Affairs of the Republic of Indonesia 2014-2019, and 2019-2024. The diplomat, born 58 years ago, has dedicated his career as a diplomat. Retno was noted to start his career from the bottom, starting from the Secretary of Economy of the Embassy of the Republic of Indonesia in The Hague, the Netherlands from 1997 to 2001. After that, he was promoted as Director of Western Europe in 2003.

In 2005 he was appointed as Ambassador of the Republic of Indonesia to Norway and Iceland. After finishing he was pulled back to Jakarta to be appointed as Director-General of Europe and America, which oversees relations between Indonesia and 82 countries on the European and American continents.

In 2012, Retno was entrusted to reoccupy Europe as the Ambassador of the Republic of Indonesia to the Kingdom of the Netherlands, before finally being appointed by President Joko Widodo as Foreign Minister in 2014. Retno also recorded many achievements including being awarded the Order of Merit from the King of Norway in 2011, which made him the first Indonesian to receive the award.

In 2017 she was also awarded as an agent of change in the field of gender equality and women’s empowerment from the United Nations Women and Partnership Global Forum (PGF). This tough woman born in Semarang also looks very fond of batik, seen from the clothes worn during state events.

As seen in the picture one where he took a picture with the Minister of Maritime Affairs and Fisheries 2014-2019, Susi Pudjiastuti. He was seen wearing a batik shirt in 2018. He was seen wearing a top patterned as sogan Pintu Retno. Pintu Retno is usually worn during weddings and is usually worn by the bride’s parents. Retno’s door motif itself is a symbol of the entry or decline of grace where Retno means vision.