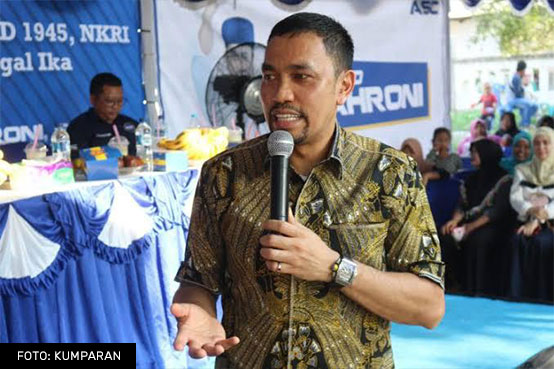 Ahmad Sahroni is a young successful person in business as well as politics. A 42-year-old mogul is one of the richest in the Jakarta, particularly in tanjung Priok area. He is rumored to have various diversified businesses, which primarily in logistic and oil.

As seen on the picture (kumparan.com), Sahroni was on campaign for Parliament Elections in 2018, he was wearing black batik shirt with pattern of Merak Ngibing. Merak Ngibing is original Garutian (Western Java) batik pattern. It is illustrated to form two peacocks standing up side by side with their wings left opened.

Merak Ngibing shows dancing together which symbolizes beauty, harmony, and get along well, peace and joyful. Merak Ngibing is often worn for cultural events, formal occasions, and wedding receptions. Due to its nature, patterns from Western Java is widely acknowledged to be flexible, therefore there is no unbending rules abiding into it.