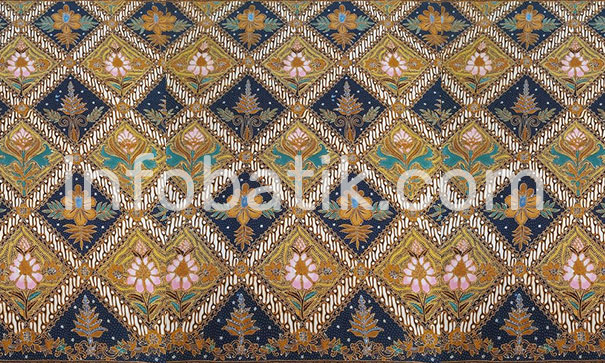 Batik Ceplok is one of the standard motifs or the main motifs of the ancient Mataram Kingdom which is currently divided into the Yogyakarta Palace and the Surakarta Sunanate. As has been reviewed in previous articles, the ceplok motif is depicted with symmetrical and geometric motifs, which form circles or squares that extend along the fabric. These geometric motifs are usually combined with other object elements such as flowers, garuda, or birds. The neatly symmetrical depiction of the motif is an analogy of human life which contains the hope of an orderly life and suggests that human life is in accordance with the fate line destined by God. The use of ceplok batik in ancient times, is identical to the uniforms of government bureaucrats. This contains the hope that the user remains trustworthy in carrying out his duties straightly, honestly and prioritizes common interests over personal interests.

One example of the oldest ceplokan motif is ceplok kawung, where this motif is considered a combination of motives that describe perfection, where kawung is a symbol of neutrality of mind and soul. No less common is Ceplokan Jamblang. The ceplokan jamblang motif is a combination of two motifs, ceplok and jamblang. Jamblang itself can be interpreted as a type of fruit tree from the guava species. Jamblang leaf trees have a height of up to 20 meters and large leaves up to 10 cm. jamblang is also believed to be an alternative medicine for diabetics. The main property of this tree is as a good conditioning and oxygen provider. This means that ceplok jamblang is suitable for a leader who nurtures and protects his community, whose character is honest and also trustworthy in carrying out his duties as a leader.