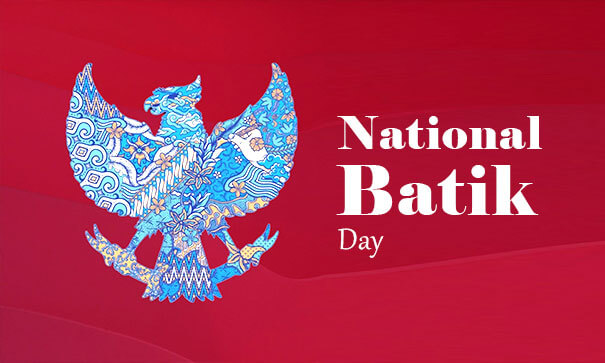 National Batik Day is a national celebration of Indonesia where batik was declared as a Humanitarian Heritage for Oral and Non-Cultural Culture (Masterpieces of the Oral and Intengible Heritage of Humanity) on October 2, 2009 by UNESCO. Every time this celebration, every layer of Indonesian society at home and abroad is advised to wear batik.

Batik was introduced for the first time to the international community during the UN conference by President Soeharto. National Batik Day can occur when during the era of President Susilo Bambang Yudhoyono (SBY), he was registered on September 4, 2008 to obtain the status of Intengible Cultural Heritage (ICH) through the UNESCO office in Jakarta. This status is registered through the office of the Coordinating Minister for People’s Welfare, which represents the Indonesian government and the Indonesian batik community. On January 9, 2009, the application was officially accepted by UNESCO. Batik was inaugurated at the fourth session of the Inter-Governmental Committee on Oral and Nonbendawi Cultural Heritage held by UNIESCO in Abu Dhabi on October 2, 2009. In addition to batik, UNESCO has also recognized keris and puppets as the Human Heritage of the Great Works of Oral and Intangible Culture.

One of the motives for registering batik to UNESCO is due to a feud with Malaysia, where they claim batik is Malaysian culture. This is due to the cultural similarities between the countries of this family, Indonesia and Malaysia. Historical lines and similarities in language are other causes. The Indonesian government issued Presidential Decree No.33 of 2009 which established a National Batik Day in order to increase public awareness of the protection and development of batik in Indonesia. Secretary General of the Minister of Home Affairs Hadi Prabowo issued a Circular No. 003.3 / 10132 / SJ regarding “The Use of Batik Clothes in the Context of National Batik Day 2 October 2019”. In this circular, the Ministry of Home Affairs appealed to all officials and employees in the district / city provincial government to wear batik clothes.