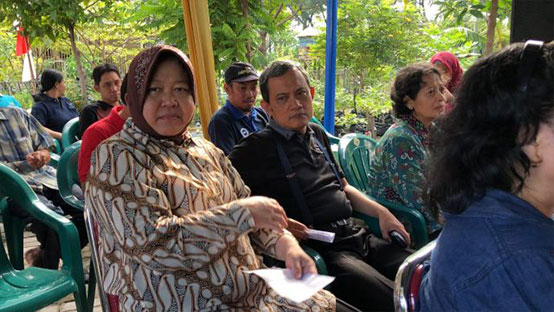 Like the Taman Bungkul Incident in 2014, where PT. Unilever Indonesia held free Walls ice cream parcels and was held at Taman Bungkul. The incident became heated when Risma came to inspect the event and the organizers and participants stepped on the grass and destroyed Bungkul Park, and all the people in the place were scolded.

It also happened when he inspected the Surabaya City Dukcapil when many Surabaya residents had not yet received an E-KTP that the residents felt was difficult and took a long time. But besides that, many awards were received by the Chairperson of the Indonesian Democratic Party of Struggle for Education and Culture, such as Surabaya being crowned the Future Government Award in 2012 by Citynet for its success in managing the city environment until the third best Mayor in the world by the World City Mayors Foundation in 2015. And in the same year, Risma could change the localization of Gang Dolly into a place that was clean from the face of prostitution for almost three decades.

It is known that Risma is also fond of wearing batik, seen from the picture of the moment when voting in the 2019 Presidential election. It was seen that she was wearing a Parang Barong patterned batik dress accompanied by her husband, Fajar Mujianto. Parang Barong is known as the original motif of the Yogyakarta Palace. In its structure, Parang Barong is the mother of all Parang motifs. Parang comes from the word war because of its long and diagonal shape like a weapon, and Barong is a lion who is believed to be the king of all animals.

In ancient times the word in the Yogyakarta Palace, only kings were allowed to wear this machete barong motif, but after the development of the era, and many reproduced motifs were finally used by many people. Parang Barong itself has a philosophy of self-control in a continuous effort, wisdom in thinking and prudence in acting.