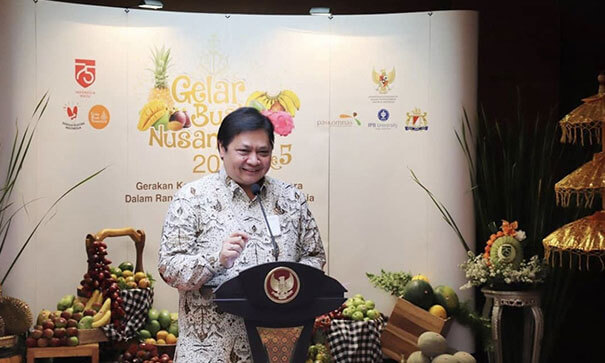 Airlangga Hartarto is the Coordinating Minister for the Economy of Indonesia for the period 2019-2024. The man who was born in Surabaya, October 1, 1962 in the previous period served as Minister of Industry of Indonesia from 2016-2019, and the general chairman of the Golkar Party from 2017 replaced Setya Novanto. Airlangga is said to have had a good career, where he has held many positions such as President Commissioner of PT. Fajar Surya Wisesa, President Commissioner of PT. Ciptadana Sekuritas, and President Director of PT. Bisma Narendra. The husband of Yanti K. Isfandiary and 8 children can also be said to have continued in the footsteps of his father, Hartarto Sastrosoenarto, who during the Soeharto era also served as Minister of Industry.

As seen on Airlangga’s personal Instagram, he loves to wear batik at every event. As seen during the August V 2020 National Fruit Title event in Jakarta, he wore a typical Cirebon batik patterned with a bridal gown. The Sawat Bride motif is very synonymous with the typical West Java motifs, especially Cirebon, and more precisely trusmi. The Bridal Sawat motif consists of two patterns. The first pattern is depicted with a hayat tree surrounded by a tongue motif, and the second pattern is a saga tree surrounded by tongue motifs, garuda motifs, and meru motifs. Sawat itself in Javanese is defined as wing, or lar (in Cirebon language). This motif is associated with the bride and groom when they misinterpret sawat with sahwat (lust) which is synonymous with the newlyweds. Batik Sawat Bride has the meaning of describing the relationship between the microcosm or the human mind such as birth, body and mind, and also macrocosm, namely the relationship between humans and the universe. In conclusion, the Sawat Bride motif is a manifestation of the symbol of hope that people who wear batik can be blessed with happiness and are always protected by God from temptation.