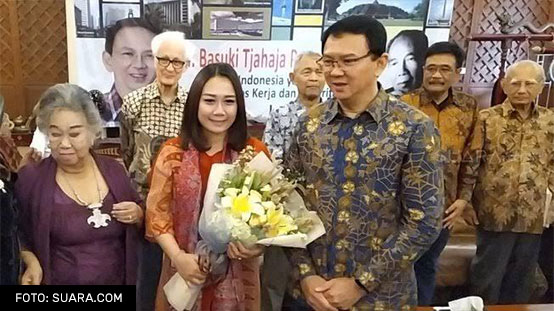 Basuki Tjahaja Purnama or widely known Ahok for Indonesian people is one of the most phenomenal politicians Indonesia has ever had. Starting off his carrier as The First Head Regent Eastern Belitung 2005-2006, Member of Parliament 2009-2012, thus decided to run into DKI Jakarta Governor Election with Jokowi. They won the election and put Ahok as vice Governor of DKI Jakarta 2012-2017.

He stepped up as Governor when Jokowi became The President of Indonesia in 2014. He then decided to join the second election running as the Governor again, but lost from Anies Baswedan dan Sandiaga Uno in 2017. He once was tripping over a case, by an allegation of blasphemy, which was denied by him. He argued some people have politicized the case in order to detrude his credibility and reputation.

Ahok, as seen on the picture is sharp on a batik shirt. It was taken when he received an award from Rooseno as the most integrity figure in 2019. He was seen to have worn Spider Web batik pattern.

Spider itself is an animal whose character is patient and focus. It has to be patient when they build up their own web, and need to be focus when their prey is on it. Most of the time they fail, but spiders often give some learnings how to become persistent to reconstruct the web even to survive in their life.