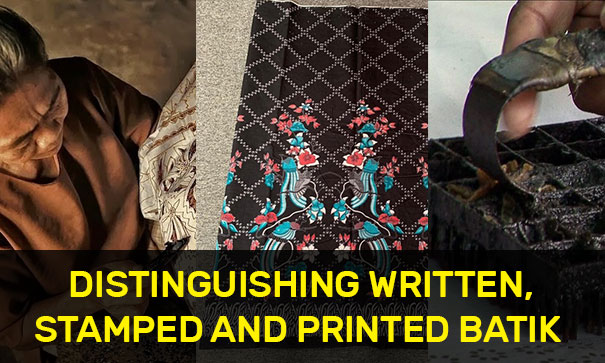 Every batik lover knows that Batik in Indonesia has several processes, namely written batik, printed batik, and printed batik. Each type also has its own market, depending on the preferences or choices of each individual. There are those who really like written batik, some just like printed batik, but there are also those who just want to collect or buy printed batik. This time we will discuss what the differences are between these three types of batik, and how the three of them can still exist by having their own “market”.

Written batik usually has basic colors that are lighter than other types of batik on each stroke of the motif. Usually, the types of fabrics used are cotton and silk fabrics. Cotton or silk that is purchased is usually plain white before dyeing or even dicanting.

For printed batik, the colors that are usually used are more colorful and festive, because the coloring also uses chemical dyes that can be used according to whatever color combination you want to print.

Due to the manual process and directly pressed by hand, written batik usually has the lowest level of neatness. This can be proven in every canting stroke made on a piece of written batik cloth, there will never be the same, because each stroke also depends on the sitting position, mood, and it is also believed that the prayer of the pencanting. This is like writing a book by hand, where every curve of the letters scratched will never be the same. Stamped batik motifs can be said to be less varied because they use stamp prints which result in every motif that is created making it always repeating. Meanwhile, printed batik has very neat motifs, there are no scratches that exceed the motifs, it tends to be more symmetrical and neat.

Written batik usually has the same face in terms of style, color and motif, and usually the canting ink used will penetrate to the back of the cloth. This is due to the factors mentioned that the cloth used is plain white cloth when drawn or dicanting which results in a piece of original written batik that can be said to have two faces because it is transparent to the back. Meanwhile, for printed batik whose motifs and patterns are repeated, sometimes it can also be translucent to the back, only tidier and not as complicated as written batik. Printed batik has the neatest colors and motifs compared to his two brothers. If you buy a printed batik cloth, you can immediately distinguish it from the face motif which is full of colors and motifs, where the back of the cloth remains plain, and is white without any copy of the motif.