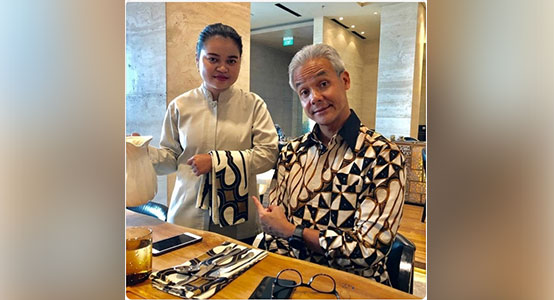 Born in Central Java, October 28, 1968, Ganjar Pranowo is the Governor of Central Java for two periods, 2013-2018 and 2018-2023. Ganjar is a phenomenal figure in Central Java because of his expertise in managing the region. He is considered to have made many breakthroughs in fixing bureaucratic structures, especially in Central Java. One of the most famous is the use of social media Twitter.

Twitter media is used by Ganjar in communicating with its citizens. According to him, this media is very suitable and effective whenever there is a problem or the latest information so that it can be quickly handled quickly and accurately. In addition to being active in receiving information, Twitter is also used by the governor to listen to the aspirations and criticisms of its citizens which are considered by many to be a step to improve bureaucracy and public transparency.

Many other programs carried out by Ganjar during his term were considered to be good, such as Central Java, which was awarded the Corruption Eradication Commission as the most reported gratification in 2015. There were also policies such as the rejection of the uniforms of the State Civil Apparatus (ASN) by the Ministry of Home Affairs, then ordered the entire ASN in Central Java to use Batik from Tuesday to Friday, which resulted in an increase in the batik market in Central Java.

Ganjar looks very fond of wearing batik motif clothes when Ganjar took a photo with a waitress at one of the hotels, where Central Java is the epicentre of batik motifs. In the first picture, Ganjar is wearing sogan batik with white domination with a machete barong pattern with a slobog motif.

Parang Barong is a type of machete with the highest strata which is the nobility or royal family in ancient times. Parang Barong symbolizes wisdom and wisdom as a role model for its people. Whereas slobog means loose which is associated to a deceased person can be broadened to his soul. But another meaning, slobog is a suitable motif used at the inauguration ceremony for new officials, which means that all the mandates given can be carried out properly.

In the second picture, it is seen that Ganjar is seen accompanying the King of Malaysia, Yang Perttuan Agong Al-Sultan Abdullah Riayatuddin Al-Mustafa Billah Shah in August 2019 when the Sultan visited the Jogjakarta Palace to meet Sri Sultan Hamengkubuwono X. Ganjar who was seen watching Sultan Abdullah take photos Borobudur temple miniature was seen wearing a black batik patterned in the way of black sogan puppets.

At a glance, the puppet character on Ganjar batik is Batara Wisnu. Batara Wisnu, in Javanese puppet characters, is one of the most gods deemed. He can change shape and raise the dead. He is also with the God of Justice and Welfare. The vehicle he uses and is also known by many batik motif makers is Gurdo or Garuda Bird.