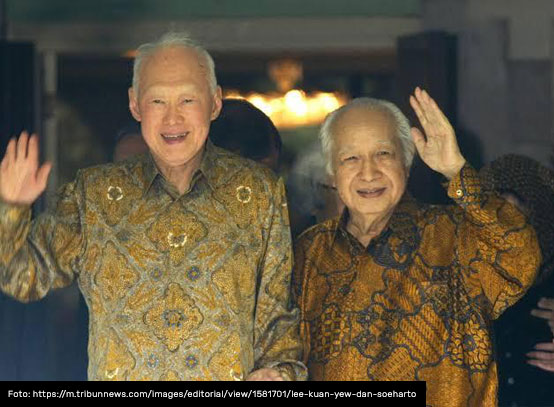 Husband of R.A. Siti Hartinah and the father of six children, were nicknamed the Father of Indonesian Development, because in the Soeharto or New Order era, there were many developments that took place mainly in the form of infrastructure development. He is also famous for his trademark who is very fond of smiling, so it is also called The Smiling General (Smiling General).

Many achievements made by President Soeharto in his era such as, Food Self-Sufficiency, a formidable economy that made him the Asian Tiger in the 90s.  Pak Harto was also seen as fond of wearing batik in his daily life and in formal state events. Even after he stepped down from his position, he was still often seen wearing batik.

As seen in the picture taken in 2006. Seen he was visited by an old friend who is also Prime Minister I and the Founding Father of Singapore, Lee Kuan Yew. Both are seen wearing batik clothes.

Pak Harto was wearing a Sogan brown batik shirt with a Sekarjagad pattern made from Indonesian batik. Sekarjagad is an original batik motif from the Mataram Palace which is currently split into two, the Sultanate of Yogyakarta and the Surakarta Empire.

Sekarjagad’s motives come from the word Sekar, which is the map, and Jagad, which is the world. So this motif looks illustrated like a world map. So that the meaning is for the user of this motif is expected to have extensive knowledge, world wide, or the elements of intelligences.

Another version says the word Sekar is interpreted as Flower, and the Universe is the World. It also seems obvious that this pattern resembles blooming flowers and meaningful diversity of flowers throughout the world. So that the overall meaning, this pattern illustrates the beauty and diversity.