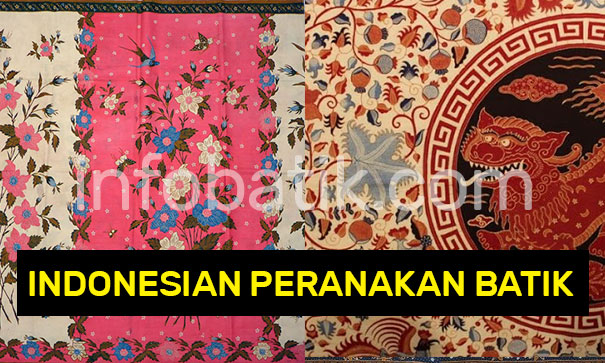 For Indonesians, the word peranakan is very familiar. Peranakans themselves, when they see the translation in the dictionary, are a term for those who are ethnic immigrants in the country of Indonesia who then live, settle, become Indonesian citizens, and have children and grandchildren in the country. Those who are labeled as peranakan are generally still closely related to their original culture and have even assimilated or mixed with the local culture. Trading activities in Indonesian soil caused the ethnic assimilation of peranakans to spread rapidly. Those who are called peranakan generally come from ethnic Chinese, Arabic, Indian and Dutch. This trading activity also led to the rapid development of peranakan batik in Indonesia, which historically developed between the 1800-1900s.

It is known that peranakan batik, according to the mode of production, is divided into two categories, namely peranakan descendants who make their own Peranakan batik and indigenous people who make Peranakan batik. For the descendants of the Peranakans, when they make or produce batik, the motifs and colors are made, mostly describing the original details of where they came from. Whereas the natives who produce them, the motifs and colors are usually mixed with the Peranakan motifs with their own local traditional motifs. An example is encim batik, which is an assimilation of Chinese, Indonesian and Dutch culture.

Encim batik is depicted as a sarong that has original Jakarta (Batavia at that time) features such as the hong and peacock, and the colors associated with Chinese beliefs, red and gold yellow. They re-created the color, avoiding white, which for some peranakan Chinese means grief. The word encim itself is taken from the Hokkien Chinese language which is widely available in Indonesia, which means aunt / aunt / mistress who has a high social class. Usually, the encim sarong is combined with the Betawi kebaya that many Jakartans wear in the early 1900s.

The history of batik has recorded that the coastal areas of the North Coast of Java Island are the areas most affected by the entry of peranakan culture, which is caused by trading activities by sea or ships leaning on ports.

The area covers Jakarta (Batavia), Cirebon, Pekalongan, Semarang, Rembang, to the eastern tip of Surabaya. That also causes each of these regions to have different hues, colors and uniqueness depending on how the local culture influences the mixture with the culture carried by the descendants of the Peranakans. In addition, during the early days of the Dutch occupation in Indonesia, many batik artists from this windmill country landed in Indonesia with the culture of their country. Call it Carolina Josephine Von Franquemont in 1840 who introduced Prankemon green, the original green of plants. Then there is Elisa van Zuylen who incorporates patterns of flowers, trees, birds and butterflies that adopt European flora motifs. Metzelaar, another Dutch batik artist, raised the fairy tale motifs from Europe, including Hansel & Gretel, Sleeping Beauty, Cinderella, etc. The following are also other Dutch artists such as A.F. Jans, Willer, Jacqueline Van Ardenne, Catherine Caroline van Oesterom, Scharff von Dop who have their own uniqueness.

It was different during the Japanese occupation in Indonesia which experienced the influence of this power. On the north coast of Java there are batik factories owned by Indo-European or Indo-Arab peranakan, and they were required to work during the Japanese occupation. The result of this acculturation has produced a batik motif that is well known to date, namely the Hokokai batik motif. Hokokai contains complete and detailed details and fillings such as the Pagi-Sore batik motif which is a combination of two different motifs and colors on a piece of cloth, the Terang Bulan motif, and the Tanahan Semarang motif, but the most famous one is the Sakura Flower motif. For details, the Hokokai Batik fauna motif is a peacock which symbolizes beauty.

What we specifically discuss in more depth is the Chinese peranakan batik along the North Coast of Java. The area is spread over a large area, namely Jakarta, Cirebon, Indramayu, Pekalongan, Demak, Lasem, Tuban, and Gresik. Some of the famous batik artists include The Tie Siet, Oey Soen King, Liem Hok Sien, Liem Boen Tjoe, Liem Boen Gan, Phoa Tjong Ling, and the most popular is Oey Soe Tjoen. This original Chinese peranakan batik carries some of the mainstay motifs of the mythology of the bamboo curtain country such as the kilin, dragon, phoenix (hong bird), gods, fire, beginnings, and flora. The basic difference with original Indonesian batik lies in the coloring technique. Old Javanese batik uses several natural colors such as genes, soga, pace root, and tingi wood, while peranakan batik uses solid primary colors such as red, blue, green, etc. Even the gradation batik coloring was initiated by the peranakan batik artist. For the meaning of the original Peranakan Chinese motifs, it can be seen, for example, the chrysanthemum flower motif which means welfare and beauty. Dragon motif can be interpreted as a symbol of good luck and prosperity. Likewise, fish motifs are believed to bring abundant fortune, and all of these motifs have been passed down to the artist’s children and grandchildren to this day.

For areas in Central Java such as Lasem, with his famous artist Tjoa Giok Tjiam who made batik with original Chinese characters that made the famous Tigo Nagri batik work. It is called Batik Tigo Nagri because it is made in three different places or cities. The main coloring is only three colors which represent the place of each color. The brown color symbolizes the place it was made in Solo with the sogan color, the blue color was made in Pekalongan, while the red color was made in Lasem. Another case in Solo, the legendary artist is equivalent to the Indonesian Batik artist, Iwan Tirta, namely the peranakan batik maestro Go Tik Swan or known as K.R.T. Hardjonagoro.

He is known for his work in making Peranakan batik manuscripts mixed with Indonesian batik by exploring batik patterns that are rare and rarely known to people. From this pattern, batik manuscripts were developed from motifs to coloring techniques which did not only use brown, but were combined with more modern colors such as blue, white, or golden yellow. This coloring is adopted from bright coastal batik combined with Mataram, Solo and Jogjakarta motifs, or what in Dutch is called Batik Vorstenlanden.