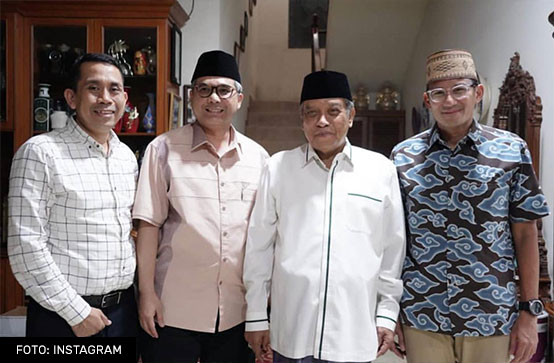 Sandiaga Uno is one of the most prominent businessman in Indonesia, listed in Forbes for 100 Richest Man in Indonesia. Sandi, his nickname, was Chief of Himpunan Pengusaha Muda Indonesia or Association of Indonesian Young Entrepreneur 2005-2008.

He is also a politician by being Gerindra Party’s member. Along with Prabowo Subianto, he run as candidate of Vice President of Indonesia 2019-2024. He is often seen and keen on wearing batik shirt.

Batik shirt worn by Sandiaga Uno (Most Right) is Mega Mendung patterned shirt. This pattern is illustrated as a flock of clouds as he frequently wears the same pattern. He admits profound of Mega Mendung as his parents origins is Cirebon, West Java, the regions where Mega Mendung come from.

Mega Mendung symbolizes the pattern which always soothing, calming, and make tranquillity to the wearer feelings. This pattern is also suitable to be worn by a leader, hoping that he/she is able to protect and look after the followers.