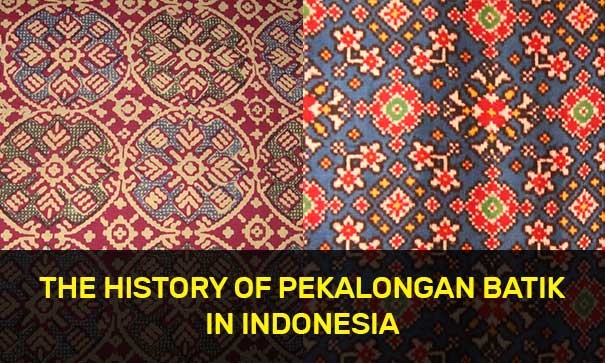 Since Indonesian Batik was designated as the Intangible Culture of the Indonesian Nation by UNESCO in 2009, batik has become a manifestation and identity of Indonesia. Indonesians of all ages, social classes, and across generations started an interest in the art of batik, both in the form of cloth and finished clothes. This has changed the image of batik that is labelled as ancient into an art which is especially seen by the younger generation as a proud identity. Because of this interest, knowledge about batik began to appear in the public media, along with increasing public curiosity. Among the popular Indonesian batik such as Solo Batik, Jogja Batik, Makassar Tenun, and Balinese Weaving, one of the origins of batik that cannot be forgotten about its history and development is Batik Pekalongan. Pekalongan is one of the cities located on the north coast of Central Java which has a long history of how the batik civilization occurred in that city.

It has been widely discussed in previous articles, where the history of the city of Pekalongan being the center of batik in Indonesia is closely related to the civilization of the Islamic Mataram Kingdom with also the history of how the traveling traders or merchants also traded to a city called the World Batik City. The great war in the Mataram Kingdom between 1825-1830 or the so-called Javanese War, made all the royal families leave their palaces which were divided into two directions, east and west. To the east they headed towards Solo and Jogja to Surabaya, while to the west they headed towards Banyumas, Cirebon, Tegal and Pekalongan.

Much earlier, history recorded that batik in Pekalongan began in the 18th century, around 1740 to be precise, when there was a cloth trade transaction to Jakarta or Batavia at that time from Pekalongan with a total transaction of up to 20,000 Spanish Real (VOC currency at that time. ) dalah last year. A famous batik trader from Pekalongan named Nyai Singobarong, a batik seller with the Pronocitro brand, became one of the pioneers or one of the oldest batik sellers in Pekalongan, since the time of Sultan Agung to rule the Mataram Kingdom. The batik process that makes it a batik center is estimated to have existed in the 1830s after the Java war with its people who emigrated to several regions.

The emergence of several areas in Pekalongan itself made many villages there blossom into small batik centers. Call it Wiradesa, Kedungwuni, and Tirto which are the batik centers of Pekalongan in the west area, and some in the east such as Setono, Nglumprit, and Warungasem. Due to the busyness of the city in building new centers, word got out to traders from outside Indonesia to come and buy their products. Many traders from Malay, Bugis, Chinese, Arabic, Indian as well as European. These trading activities not only provide benefits in increasing their income, but also how the inculturation of cultures that enter from all corners of the world allows batik producers to modify the motifs they make according to the tastes and cultures of their customers. This also makes Indo-European women also have a special interest in the art of batik.

Some Indo-European women have the art of etching a painting onto a sheet of cloth which later changes the fashion culture of the women of this descent. The book written by Harmen Velduisen entitled “Dutch Batik 1840-1940, Dutch influence on Javanese Batik, History and the Stories Around it” states that these Indo-European women were the wives of municipal officials. Some of them live in the area of ​​Jalan Harenstraat (now Jalan Diponegoro and Imam Bonjol), Jalan Residenweg (Jalan Progo), and around the Bugisan area. Indo-Dutch female figures include Lein Metzelaar, Eliza Charlota van Zuylen, and Christina van Zuylen. Meanwhile, several peranakan women of Chinese descent who have had grandchildren have become batik artists in Pekalongan including Oey Soe Choen, Oey Soen King, and Liem Ping Wie.

Some of the motifs that are produced due to the mixing of Indonesian culture with other countries are such as the Jlamprang motif which is inspired by Indian and Arab countries, where this motif is a development motif from Indian Potola cloth which forms like many dots, stars, and wind direction motifs. Unlike the case with mixing with Japanese culture which gave birth to a motif called Javanese Hokokai Batik or New Javanese Batik.

The pattern of batik production in Pekalongan at that time was also determined by the agricultural cycle, where during the harvest period they worked in the fields, and paused while waiting for the next harvest they produced batik. This also indicates that the batik industry in Pekalongan relies on small entrepreneurs, not big ones. This is because many producers do not have factories to manufacture batik, but they are done in houses and garages, where this industry supports the people’s economy and the economy of the Pekalongan area in general. Currently, it is also undeniable that Batik Pekalongan is an icon of Indonesian batik. not only Solo or Jogja, Pekalongan is very interesting and more up-to-date with the times, where the colors match the tropical climate in Indonesia which is bright and bold, as well as various motifs, making the character of the Pekalongan people have characteristics open to outside culture. but with an Indonesian foundation that remains strong and does not fade.