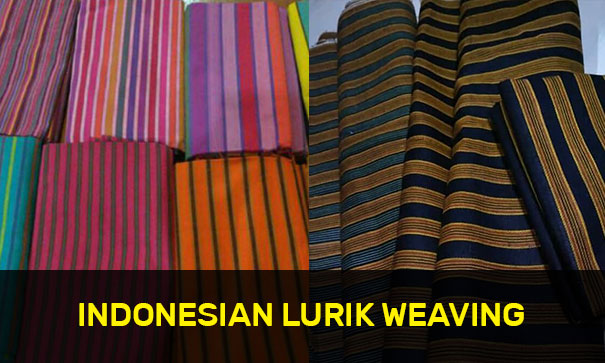 Lurik is one of the cultural arts of Indonesian wastra which is made by weaving techniques made of cotton by hand twisting with a tool called gedongan. Taken from the Javanese language, lorek which means lines which mean simplicity and humility. The lurik fabric is only patterned with lines, but is divided into large and small lines. Motifs with patterns that extend vertically are called lajuran, and morifs that form horizontal lines are called poor feed and plaid patterns are called cacahan. Lurik weaving does not have many line motifs, but the coloring aspect makes it special and interesting to enjoy.

Most of the names of patterns or motifs in lurik come from the names of various native Indonesian plants and flora which do not have any special meaning or meaning in each of their names. Some of the names of the striated variety are sodo sakler, lasem, tuluh watu, kinanti, lompong keli, flower telo, jasmine secontong, ketan ireng, loro-pat, flower spinach, dawuk leaves, kumelap latitude, plain brother, galer, and many more. again. The Yogyakarta Hadiningrat Palace also has its own lurik motifs patented by the palace, such as telu-pat, mantrijero, patangpuluhan, jago-karyo, and ketanggungan. These motifs are usually worn by court soldiers when they want to face the king. Lurik is also known as a cross-caste cloth, which means that it can also be worn by commoners. They can and usually wear lurik during cultural ceremonies or cultural festivals. Strangely enough, lurik has been around for a long time (9th century) compared to the existence of batik cloth (16th century).

The process of making woven cloth itself is actually not difficult, there are only 6 stages. First the ingredients are prepared like threads from herbaceous plants with a black and white base color. The second stage, the yarn is dipped in traditional coloring materials, namely Tarum and mahogany bark. Tarum will produce black, dark blue, and orange, while mahogany will produce brown. The third stage, the thread is then washed clean and beaten while in the sun. The next stage, the thread that has been dried in the sun to dry is covered with rice with a brush made of coconut husk. Its purpose is to stiffen the thread. The fifth stage, the threads are then dyed and dried again. Then the sixth stage, the thread is then spun and woven with gedong into a piece of striated cloth.