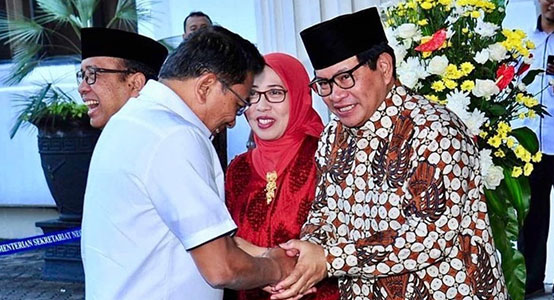 Pramono Anung was born in Kediri on June 11, 1963. He is the Secretary of the Cabinet Secretary 2016-2019 and 2019-2024. He graduated with a degree in mining engineering from the Bandung Institute of Technology, and a master’s degree in management at Gadjah Mada University, and finally in January 2013, Pramono holds a doctorate in political communication from Padjajaran University.

Started his corporate career when he held a number of important positions as a director at PT. Tanito Harum 1988-1996 and PT. Vietmindo Energitama 1979-1982, and commissioner at PT. Yudhistira Haka Perkasa 1996-1999. His political career was also explored by starting from the bottom as Deputy Secretary-General of the PDI-P DPP in 2000, then rising to PDI-P Secretary-General in 2005.

He was then elected as Deputy Speaker of the House of Representatives for the 2009-2014 period from the PDIP, until before being appointed as Secretary of the Indonesian Cabinet.

This smiling man is one of the key people in the success of President Joko Widodo in running the government. As Secretary of the Cabinet Secretary, he functions as the person who manages cabinet management to the President and Vice President, where this position is at the ministerial level.

It is seen Pramono Anung is holding a Halal Bi Halal, a procession conducted after Eid al-Fitr which is intended as a symbol of forgiveness. The procession took place at the RI State Secretariat in 2019 ago.

Pramono is seen wearing batik dominated by white and Sogan brown. Seen he was wearing a Kawung patterned batik with a symbol of Gurdo or Garuda at the end. The word Kawung itself according to some sources was created from Kwangwung insects (black beetles) which are oval-shaped or oval which is suspected to be one of the origins of Kawung motifs.

Furthermore, the source said that one of the origins of the kawung motif was created from the fruit of the fruit, which after peeling resembled the kawung motif. The motif, which is said to be 12 centuries old, is seen at the foot of the statue of Ganesha Temple Syiwa in Prambanan Temple so that the motif in this relief is relatively old.

The true meaning of this Kawung motif is a clean heart, useful for many people and a symbol of unity of the people. Whereas Gurdo or Garuda is the vehicle of the god Batara Wisnu who in ancient times, Javanese Juno believed that Gurdo was the main symbol of virility or masculinity.