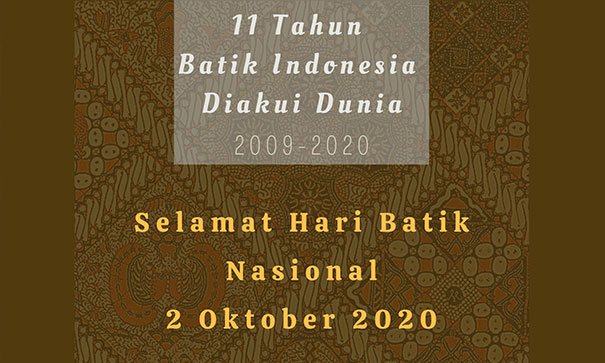 Every October 2, Indonesia celebrates National Batik Day and World Batik Day. This is because batik has been designated as a Humanitarian Heritage for Oral and Nonbendawi Culture (Masterpieces of the Oral and the Intangible Heritage of Humanity). Not only the scale within Indonesia, but batik day can also be celebrated by all people in the world.

It has also been explained in the previous article how the process of Indonesia to get this world recognition through UNESCO, to be precise on October 2, 2009.

Here are some of the criteria that made Indonesia get the award of this batik day:

1. Batik is Rich in Symbols and Philosophy

2. Batik is a link between the past and the future

Basically, Indonesian batik is usually passed down through generations by our ancestors, who made batik as a manifestation of the link between the past and the future. This is what makes batik one of the legacies that never break its friendship with the next generation. So that in this aspect of heritage, UNESCO considers that Indonesian batik is worthy of the title of world heritage, which is a culture that is passed on to the next generation to their children and grandchildren. Also the most important essence in this aspect is to contribute in forming a national identity in a sustainable manner.

3. Batik is the Adiluhung Heritage of the Modern Era

This shows that batik is a traditional culture that will continue to live in the modern era like today. Batik is a representative of Indonesian culture from time immemorial. The kings wore batik with a philosophy of their social status and power, and future generations developed it as the identity of their predecessor kings. Uniquely, batik is currently not only seen as one of the traditional, valueless objects, both historical and economic. These two aspects are currently practiced and capitalized by batik traders and entrepreneurs in driving the economy in the MSME sector, retail, and antiques.

Batik is not only loved by the Indonesian people, but also by the world community. This is also what makes batik open recognition by the world. A strong example is that many expatriates in Jakarta, especially those who work wearing batik, also fall deeply in love with batik. If we look at the famous batik shop, there are many foreigners who appreciate batik by buying it at a price that is not cheap. The next example is where several well-known batik brands such as Alleira which opened a shop in Singapore and Iwan Tirta which had a boutique in New York, USA. Meanwhile, according to Katadata.co.id, the export value of batik crafts itself in 2019 reached 253 billion Rupiah. This indicates how non-Indonesians also helped promote our culture by loving batik. According to the Dutch archaeologist, JLA Brandes, batik is one of the 10 indigenous cultures owned by the Indonesian nation. This is also reinforced by the statement of Sir Thomas Raffles, who was once in power in the Dutch East Indies 1811-1816 who said that he was very fascinated by the beauty of batik written in his book History of Java.